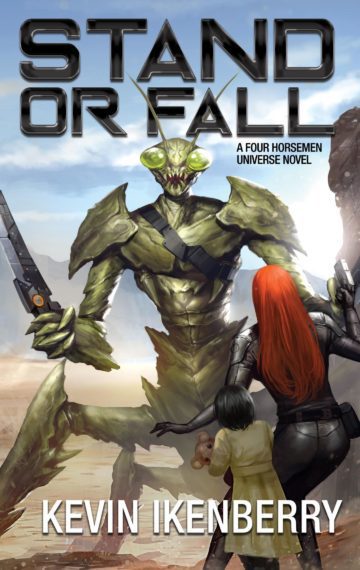 While the occupation of Earth continues, MinSha mercenaries under the command of Major General Drehnayl have assaulted Human-held colonies in the outer rim, wiping them out completely. With the famed Four Horsemen nowhere to be found, the Mercenary Guild’s attempt to instill fear and subvert humanity is perilously close to reality. Tasked with finding the MinSha is Jessica Francis, Earth’s first Peacemaker, but the odds aren’t in her favor. Racing against time, Jessica realizes that finding Drehnayl’s forces isn’t enough—she must do something to stop their atrocities and end their reign of terror.

Upon locating the MinSha fleet, Jessica faces down Drehnayl’s armada with a band of heroes both hopelessly outmanned and under-equipped on the binary planet Victoria Bravo. Her decision made, and with MinSha Lieutenant Colonel Tirr and the near-AI Lucille at her side, Jessica charges into battle intent on stopping Drehnayl once and for all…or to die trying. A Peacemaker must set the terms, honor the threat, and know when to stand or fall. For Jessica and her friends, that time is now.